The symbol of our council 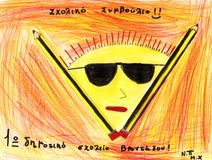 According to schedule of the European programme Erasmus plus named “Big issues in small hands” in which our school is involved, the students of D,E and F classes voted for their first time to choose  eleven representatives for their school council. The council will represent all students and will take into consideration their proposals. In this council there are four representatives from F class, four from E class and three from D class. The elections took place on 3rd December 2014.

Activities before the elections

Brainstorm with the word “rights”. Discussion on the rights and ways to stand up for them. Conclusions showed that in schools  students’ representation is the best way to get involved and defend your rights. The idea of a school council came up.
The students divided in small groups walked around the school and wrote down the problems of their school which could be solved without money.
In order to understand what a good school council is, the students took part in several games and activities in classes aiming to realize the importance of their role and the criteria on which they should choose their representatives.
One of the games was to choose the ‘yes’, ‘no’ and ‘mavbe’ corner according to their answers to the questions about which subjects could be discussed in a school council.
Some students wrote and delivered their speeches in the school assembly and others prepared posters to promote themselves.
After the elections
The students were taken interviews in which they expressed their impressions and feelings after the experience of school elections.


﻿Preparing the elections for a school council﻿

The ideas are from the site  http://involver.org.uk/resources/
A short toolkit for school coordinators.
Teachers meeting to inform and plan the activities of Erasmus+

The teachers of the school were gathered  to discuss the annual plan of the school and especially the projects which the teachers will organize throughout the year.The headteacher informed the staff about the European project Erasmus+ and the school’s responsibilities on it as well as the  teachers’ mobility in Czech and the activities which were organized there. A group of teachers was formed to have the responsibility for the implementation of the project activities in classes. Finally the project coordinator Tonia Bacha presented the activities to be done until March 2015.

Today Monday 6 October 2014 our students prepared the Greek logo for our project BISH. All the students voted for their favourite logo after they were informed by their teachers about the plans and the aims of this project. They were motivated by the question which is the main issue in our project: What are children able to do although adults do not believe in them?
The teachers appointed a committee of three members to choose the best three logos, one of which will represent the school in the logo competition among our European partners.